by Hilary Collins and Marit Björnlund*

On April 9-12, the International Foundation for Electoral Systems (IFES) trained members of Guatemala’s National Council for Persons with Disabilities (CONADI) to carry out an election access observation ahead of the country’s general elections on June 16, 2019.

The two two-day trainings, which were co-facilitated by IFES Inclusion Specialist Rebecca Aaberg and Inclusion Program Officer Hilary Collins, included practical guidance on serving as an election observer and analyzing observation data. The trainings also included a simulation where participants practiced using an observation checklist to observe their peers in a mock election. The checklist, which was contextualized through a collaborative process with CONADI, was used during the simulation to gather mock data on access to the voting process and whether poll workers were prepared to support voters with disabilities. Sixty-nine participants, including 39 women, traveled from across Guatemala to attend the trainings. 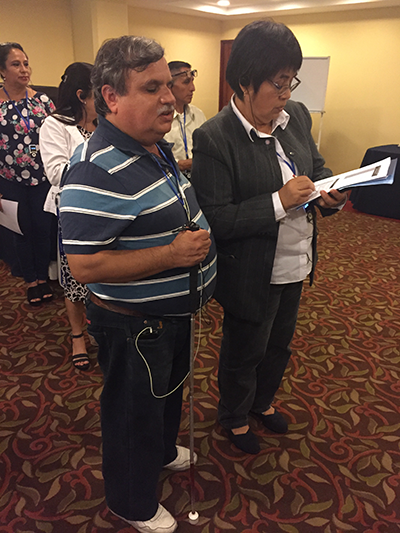 Working in pairs, participants with all types of disabilities used a checklist to determine the accessibility of a mock polling station and the voting process.

The trainings were part of IFES’ “Electoral Governance and Reforms Project” in Guatemala, funded by the United States Agency for International Development through the Consortium for Elections and Political Process Strengthening (CEPPS). IFES’ project works together with the Supreme Electoral Tribunal to improve governance of key institutions and increase citizen voice, particularly by collaborating on the implementation of Guatemala’s Electoral and Political Parties Law reform passed in 2016. The project’s objectives include encouraging effective election monitoring and observation by civil society, including the community of people with disabilities.

“I had never participated in an event like this. For me, this event was very important because it’s a new experience and it’s a new commitment with and for people with disabilities.” – Woman with a disability who participated in the election access observation training, Guatemala

IFES and CONADI’s ongoing partnership dates to 2011 and was reaffirmed in a Memorandum of Collaboration signed in early April. To view a photo gallery of the trainings, please click here.

*Hilary Collins is an inclusion program officer and Marit Björnlund is a program coordinator for the Americas at IFES.