IFE President Leonardo Valdés Zurita will receive the award on September 24, 2013 at a gala dinner in Washington, DC. IFES’ annual Democracy Award recognizes men and women who demonstrate a commitment to advancing freedom and democratic values.

Valdés has set a high standard for promoting and exchanging good electoral practices around the world. Under his leadership and expertise, IFE has become a major provider of international election assistance to election management bodies in emerging democracies. Since IFE’s establishment in 1990, Mexico went from one of the most closed political systems in the world to a respected democracy. Over the years, IFE has helped introduce a more inclusive multi-party system in Mexico.

IFES has been collaborating with IFE since 1993 to advance democracy in Mexico and to empower citizens to become active participants in the electoral process. IFE and IFES also have a strong partnership working to engage national and international stakeholders in electoral matters.

Prior to serving in his current role, Valdés gained experience with the democratic election process while serving as Electoral Councilor for Mexico’s Electoral Institute of the Federal District (1999-2005). He has also focused on electoral processes and political party systems in his scholarly work and is the author of numerous publications about democracy.

“It is an honor to receive this award. I treasure it as the result of the fruitful two-decade collaboration between IFE and IFES, an institution that stands out for its tireless work supporting the promotion of democracy worldwide,” said Valdés.

“Valdés has demonstrated an unwavering commitment to freedom and democracy,” said IFES President and CEO Bill Sweeney. "Thanks to IFE and its leaders, including Valdés, Mexico has implemented meaningful electoral reforms that ultimately resulted in more credible national elections in 2012.”

For more information about the awards, please visit www.IFES.org/DemocracyAwards.

As the global leader in democracy promotion, IFES advances good governance and democratic rights by providing technical assistance to election officials; empowering the underrepresented to participate in the political process; and applying field-based research to improve the electoral cycle. Since 1987, IFES has worked in over 135 countries, from developing democracies, to mature democracies. For more information, visit www.IFES.org.

Elections in Brazil: 2022 General Elections On Sunday, Oct. 2, Brazilian voters will elect the president and the vice president on a single ticket. Brazilians will also elect governors; some senators; and all federal deputies, state deputies and federal district deputies. September 30, 2022
News and Updates Feature 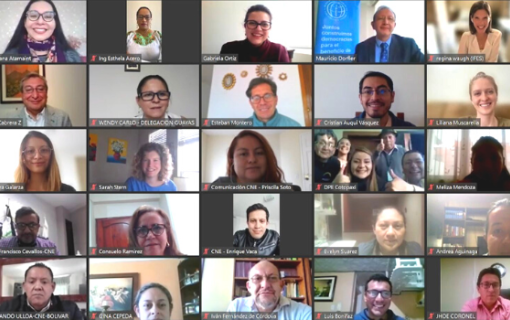