With presidential and National Assembly elections scheduled for February 16, 2019, Nigerian election officials are looking to build on the successful, peaceful transfer of power that came with the 2015 national elections. Early planning and preparations are well underway, and the International Foundation for Electoral Systems (IFES) is supporting the Independent National Electoral Commission (INEC) of Nigeria on myriad fronts to foster an effective, credible electoral process. 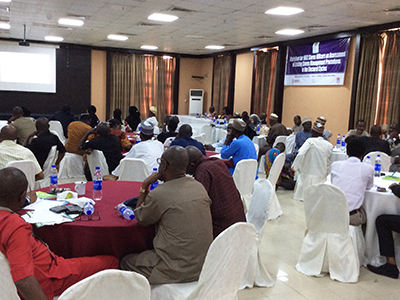 INEC’s guide for the 2019 elections is the Electoral Project Plan (EPP), an operational roadmap. The EPP was produced with technical assistance from IFES during the second half of 2017. To formally roll out the EPP, INEC with support from IFES and in collaboration with the European Centre for Electoral Support, organized a two-day EPP implementation workshop on February 16-17, 2018, in Lagos. At the workshop, which saw the attendance of the INEC chairman, all national commissioners, the resident electoral commissioners responsible for overseeing election administration in the respective states, and INEC departmental directors, participants discussed the EPP and associated timeline for electoral preparations. Now the EPP will be implemented by INEC state offices nationwide. IFES is following up with the INEC to finalize the commission’s first-ever monitoring and evaluation plan to track the progress made under the 2019 EPP and 2017-2021 INEC Strategic Programme of Action.

From the highest level of operational planning, IFES moved on to more granular support. On March 15-16, IFES in collaboration with the stores department of the INEC conducted a workshop for stores officers from INEC headquarters and state offices. Responsible for inventory management, procurement, and warehousing of election equipment and materials, stores officers are critically important custodians of electoral operations, yet their work has been challenged by inadequate storage facilities, poor supply chain management, and lack of funds and personnel for routine operations. The workshop – the first of its kind for the INEC – was convened with the goal of assessing existing stores management procedures and identifying achievable recommendations for improved, standardized procedures. The workshop was attended by 86 participants, including three national commissioners. 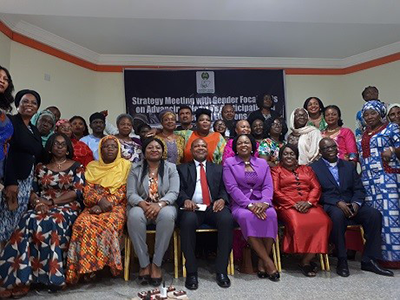 Beyond operations, IFES is supporting INEC’s ongoing efforts to improve the inclusiveness of Nigerian elections. IFES is working closely with INEC gender desk officers to see through the implementation of the commission’s gender policy, launched in 2014. The gender policy is aimed at both mainstreaming gender in electoral administration and expanding and deepening women’s participation and representation in the political process. In February, INEC and IFES organized a one-day strategy meeting with gender-focused civil society organizations to discuss emerging issues in the 2019 general elections and to deliberate on strategies for strengthening the participation of women in elections. With the general elections only a year away, INEC and civil society representatives agreed to work together to promote women as voters (such as through the ongoing Continuous Voter Registration exercise), as candidates (engaging with political parties and media to support women’s candidacy), and as security officials who play an important role in countering violence against women in elections. A total of 55 participants took part in the strategy meeting.

Additionally, IFES is working with the INEC on the development of a framework on disability access in the electoral process. This framework, which is in the final stages of being approved, will provide goals and guidelines for enhancing the participation of persons with disabilities in the 2019 general elections.

The road to the next elections is a long one, but early and effective planning and outreach will continue to be an important part of the process and a cornerstone of IFES’ support.