Moldova, one of the poorest countries in Europe and one of the few former members of the Soviet Union that have continued to strive towards democracy, is facing a challenging time in the aftermath of its April 5th parliamentary election.

Staffan Darnolf, IFES chief of party in Moldova, answers some questions about the preparation for the election, the election itself and the protests that ensued.

Since the summer of 2008, IFES has been focusing on strengthening the capacity of the Central Election Commission (CEC) to properly plan and organize democratic elections.

What do these elections mean for the democratic process in Moldova?

Organizing elections in a politically tense environment always comes with the responsibility of ensuring that the electoral process strengthens the democratic process in a peaceful way. An open dialogue across the societal divide based on rational arguments that are respectful of all the country’s citizens, regardless of individual characteristics, is the foundation for any democratic society worth its salt.

Having a so-called frozen conflict on its territory where Russian peace-keepers are stationed less than 30 minutes away from its capital naturally adds an additional dimension to the political life in the country. Last year’s war in Georgia, with its own breakaway regions guarded by Russian peace-keepers, accentuated Moldova’s own relationship to Transnistra, Russia and its ongoing dialogue with the EU.

Having said that, it would be an exaggeration to say it has been the issue dominating the electoral campaign. Instead, the opposition parties and its candidates have primarily focused on giving lofty, yet unspecific, promises to the electorate while accusing the government of corruption and mismanagement. The ruling party’s mantra has been focused on a classic argument - we have proven ourselves, why take the chance on someone who is untested, especially when they can’t even present a coherent, united front.

An additional factor clearly looming over Moldova is the global financial crisis. The national economy is primarily made up of two revenue streams: import taxes and remittances from the Moldovan diaspora. Both these critical income sources have been hit hard by the global recession, so the new government will have to face the challenges that ensue from this.

There were some demonstrations following the April 5, 2009 poll. Can you tell us about this?

In the wake of the announcement of the election results, we had demonstrators on the streets in Chisinau criticizing the outcome and alleging that the results were manipulated. The first day saw peaceful protests, but on April 7 we had some clashes with the police, and the Parliament was basically looted. Windows of the presidential office were smashed and part of the building ransacked.

In terms of the accusation of a rigged election it’s important to note that the OSCE’s Office for Democratic Institutions and Human Rights (ODIHR) observer missions had some 400 international observers covering 1,300 of the almost 2,000 polling stations on Election Day. In its preliminary statement, the mission expressed clear concerns about the government’s control of all the national mass media outlets which resulted in skewed media coverage of the campaign that benefited the ruling party. ODIHR also noted abuse of state resources in the government’s campaign. Having said that, ODIHR was in general very complimentary of the electoral process and, overall, gave it a clean bill of health, despite slight glitches such as the fact that the counting and tallying of the results could have gone more smoothly, for instance. Furthermore, serious improvements had been made to this year’s election results system, making it much more transparent not only in the polling stations, but also during the aggregation of results at the district-level and at the CEC centrally. These were procedures put in place by the CEC after consultation with not only IFES in Moldova, but also by representatives of United Nations Development Program and the Council of Europe.

The largest domestic observer group, Coalition 2009, which had thousand of observers on the ground on Election Day, is of a different opinion. They are calling the election flawed. They are not referring to polling day irregularities, or changes made to election results. Instead, they are focusing on the abuse of the mass media by the government, undue use of state resources, not enough polling stations for Moldovans living abroad, and the inability of Moldovans living in the Transnistrian region to vote. These are all important issues, but they have all been known for months. If Coalition 2009 was of the opinion that these conditions precluded the elections from being successful, why didn’t they denounce the election before the results were made? Why didn’t they make this known to the electorate and national and international stakeholders in any of the five public statements issued by the organization on Election Day? If they had, their current stand would have been much more credible.

It's important to note that the results announced so far by the CEC are only preliminary as they are only now receiving the signed results forms from every single polling station. The CEC has promised to scan and make all these results forms available on the CEC website for public scrutiny. Because a process to file electoral grievances exists, I strongly recommend stakeholders to use this peaceful mechanism to resolve outstanding electoral issues.

What was the voter turnout? Is it reflective of the overall enthusiasm for this election?

Based on the preliminary results which indicate that less than 60% of the voting population participated in the election, the voter turnout dropped quite significantly from that of the previous parliamentary poll that had a turnout of 65%.

I believe this a reflection of the political parties’ inabilities to reach out to the voters with a serious message. It is true that the national media is very much controlled by the government and the media’s message often favors the establishment, but the opposition parties’ lackluster campaigns played a significant role as well. Further, during my travels throughout the country the month before the election, I was struck by the almost total lack of voter education and get-out-the-vote messages from all parties involved--political parties, the NGO community and the Central Electoral Commission. I think a thorough review of this aspect is warranted.

How are campaigns financed in Moldova? Have any issues arisen over this?

The campaign finance mechanism has been tightened up significantly in Moldova. Part of the reason for this is that the level of corruption that exists in the country has made people fearful of the possibility of illicit resources being used to buy favor within the political system. In collaboration with the Council of Europe (COE), IFES made recommendations on how the legal code governing campaign financing could be strengthened. We also developed a campaign finance manual for the parties and candidates which can assist them in complying with the new regulations. Experiences from other countries where IFES has operated have shown that one of the best deterrents to corruption in campaign finance is effective and transparent campaign finance disclosure forms.

Based on this knowledge, IFES and the COE developed procedures and a guide for the CEC unit responsible to process the disclosure forms filed by parties and candidates every second-week throughout the campaign. This streamlined process, combined by a scanner procured by IFES for the CEC, resulted in a robust campaign finance mechanism with unprecedented access to campaign expenditures and contribution by the public, since the scanned forms were all made available on CEC’s website. In fact, a couple of complaints were successfully lodged with the CEC based on this information.

Is there public confidence in the bodies that administered the election?

The Central Electoral Commission (CEC) is responsible for planning and organizing the Parliamentary election. It is a small institution with less than 30 fulltime staff members at its Secretariat in Chisinau. The field organization - District Election Councils (DEC) and Precinct Electoral Bureaus (PEB) - is only mounted fifty and twenty days, respectively, prior to Election Day. This is very late in the process, especially as these 20,000 election officials are primarily appointed by political parties represented in the current Parliament. As parties are completely consumed by the election campaign they have little administrative capabilities to identify and appoint capable individuals in time for the CEC to train them before they assume their duties.

IFES worked intensively with the CEC Secretariat to introduce modern adult education methods, as well as standardizing training manuals for both DEC and PEB officials. For the Precinct Bureau members we developed user-friendly manuals in Moldovan and Russian, as well as a 35-minute training video, a first for the CEC. It proved extremely useful and popular. In fact, political parties and domestic observer groups also used this video in their own observer trainings.

In terms of the CEC’s credibility among the Moldovans in general, it has a mixed reputation. Some people think the CEC is doing a good job, while others are less flattering and accuse it of inefficiencies and unprofessionalism. Even though it is common to see such divergent opinions of the same institution in countries where the public’s trust and confidence in public institutions are low, the CEC should still work hard and diligently to earn the confidence of the general public.

Has there been much international assistance?

The international community has a tangible presence in Moldova and is very much engaged in the political process. All the major players (International Republican Institute, National Democratic Institute, European Union, United Nations, and the Eurasia Foundation) have been in Moldova for many years working with political parties, domestic observer groups, voter education via large numbers of Moldovan CSOs, training of journalists, media monitoring, etc. I must admit, however, that I did expect to see more progress in the electoral field given the number of electoral cycles these organizations have been through in Moldova and the level of support given to key actors in the country. At the moment, there are still improvements to be made in terms of coordination of international support and implementation by local counterparts. CEC, which IFES is working with, is no exception as the level of professionalism among its three-tier organization can be further enhanced. 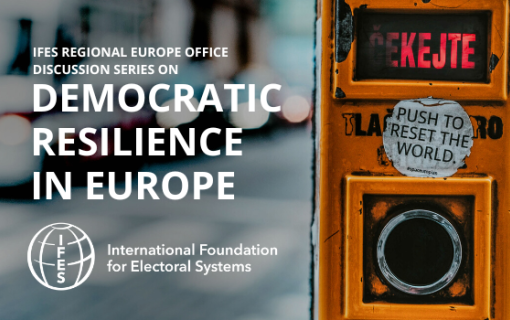