One of the tools to promote electoral security is voter education. Voter education empowers citizens with information to voice their thoughts on the electoral process through ways other than violence to help prevent conflict. Gregory Kehailia, IFES senior program manager for the Middle East and North Africa (MENA), served as IFES chief of party in the Democratic Republic of Congo during the 2011 election cycle. He answers some questions about voter education and election security.

How do you define and categorize electoral violence?

About 12 years ago, IFES defined electoral violence as any random or organized act or threat to intimidate, physically harm, blackmail or abuse a political stakeholder in seeking to determine, delay or otherwise influence an electoral process. This good, general definition encompasses, in my opinion, several forms of electoral violence.

So far, I have identified seven types of electoral violence:

Of these types of electoral violence, which can be mitigated through voter education?

Typology 7, state-on-state violence cannot be addressed by voter education and must be handled through appropriate diplomatic and military mechanisms.

Typologies numbers 1 to 3, party-on-party violence, party-on-voter violence and party-on-state violence, are not directly addressed by voter education, either. However, since party supporters are citizens, voter education can and must try to extract citizens out of the clutches of extremist political leaders.

What are the necessary components for effective voter education campaigns?

Virtually any sort of human gathering, from a theater show to a classroom or a street demonstration, can be a suitable venue for voter education. So I’ll not go in all sorts of possible activities.

The principle is to adapt the message and its vehicle to the audience. Using TV spots in an area without electricity is meaningless. Using books in illiterate groups is useless.

The two main lines of actions are get-out-the-vote activities and rights and duties awareness-raising. On this, some experts will tell you that they are two very different things; some do not consider get-out-the-vote activities as voter education.  I like to combine motivational activities with awareness-raising activities. Lack of understanding and abstention are two sides of the same coin. And willingness to participate is the best driver for one to learn.

When should these campaigns begin in order to be effective—at what stage of the electoral cycle?

Ideally, they should be permanent and fit into broader national civic education programs, which would also reach out to those who are still too young to vote. To be more specific, experience tends to show that get-out-the-vote (or get-out-and-register) activities are more efficient as short-term activities as their effects do not last very long; while awareness-raising stands well as a long-term approach.

What methods do you use to transmit these campaigns (TV, radio, community outreach, social media, mobile messaging)?

It depends on the audience; in an environment like the DR Congo, media campaigns can be very efficient in urban or semi-urban areas. Reaching out to more isolated areas or to illiterate people can work better with more proximity activities, such as grassroots education sessions based on tools tailored for the audience (such as image boxes) and implemented by local organizations.

Using local opinion leaders is advisable, as without them, entire sections of the society would remain untouched by the campaign. However, program managers must be careful not to reinforce non-democratic systems of power or bias in the electoral competition. Local opinion leaders might indeed also be candidates or supporting candidates themselves.

You mentioned that there is a strong correlation between physical violence and electoral fraud. At the individual level, what can be done to lessen this type of violence?

This is an intuition of mine, more and more confirmed by facts. In 2002, for example, an IFES study showed that during the year 2001, most of the electoral violence happened in electoral cycles ranked as “Partly Free” or “Not Free” by a Freedom House survey. In other terms, lack of credibility in the electoral process constitutes the surest road to electoral violence.

Electoral education is a fantastic tool to have an informed, participatory population in the election. But to properly address electoral violence, voter education must fit into a scheme of technical assistance which helps guarantee free and fair elections to the voters.

Voter educators should always be careful not to become official propagandists of the electoral commission. The relationship with the electoral commission when doing voter education must be a combination of close ties, as technical assistance requires, and of critical distance. A voter educator’s role is not to convince citizens, at any price, that the election was transparent and free. It is to give citizens the tools to assess fairly “in their souls and consciences,” as French people say, if the election was transparent and free. In electoral matters, as for the rest, peace requires justice.

IFES was in the DRC in the run up and during the November 2011 election. What was IFES’ role and how was conflict management integrated into the work?

When November 2011 came, IFES had a unique position in the DRC; we had been implementing a large civic and electoral education program since early 2010. It was strongly rooted in all provinces of the country and reached over 20 million people in a little over a year. This gave us considerable leeway to engage all stakeholders of the electoral process, particularly as the electoral commission made the choice not to directly implement any major electoral education campaign.

IFES was also among the first organizations, possibly the first one, to identify, back in May 2011, technical flaws that could evolve into fraud and/or technical failure on Election Day. This early-warning enabled IFES to start adapting its project to anticipate the risk of violence, which would follow a possible crisis of electoral legitimacy.

We notably integrated larger components into our information tools, such as legal dispute mechanisms, and encouraged people to use them with slogans such as “use the court, not the street.”

There is also one more general, yet important, conflict-prevention effect of voter education: the simple fact of being present in field. By being present in the field, our projects show people that we care, that the world cares, about them. For people, who may be or feel isolated, desperate and abandoned by the authorities of their country – it can mean a lot; that American citizens, thousands of miles away, are sending educators to their villages. This presence, itself, creates a sort of de facto electoral observation and can help appease tensions, bringing about a sense of responsibility. Reciprocally, it could fuel tensions if this is not followed by proper international engagement to help prevent fraud. Diplomatic silence perceived as an accomplice can even put electoral educators at risk.

Elections are highly politicized environments. What did IFES do to ensure our work in the DRC did not seem biased or unfair in any way?

The DRC is a fascinating country with two major traps for voter educators: the complexity of the cleavages dividing Congolese society – political, ethnic, religious, regional, etc. – and the strength of rumor as an information vector.

The mix of both can create a situation where, for example, if for budgetary reasons you work only in 10 districts of a city with 20 districts, you will be accused of plotting against the interest of the 10 remaining districts. What works for districts, works for provinces, communities, villages, etc. One of my priorities was to avoid any programmatic choice that could be perceived as discriminatory.

Another important aspect was to ensure messages could not be read as favoring one camp, either by being very neutral or by being balanced. At times it can be difficult to be neutral when giving examples of electoral violence; however, one can be balanced by giving an example of violence committed by the majority party with an example of violence committed by the opposition party.

It might seem excessive to an external observer, but Congolese society is highly politicized, and details are often over-analyzed. I was once asked if I am a supporter of the opposition, because I was wearing a hat, which looked like the one the opposition leader normally wears.

How do you measure the results of such campaigns?

It is not always easy. Impact surveys can be efficient for this purpose. However, one problem with such large, nationwide programs is identifying a baseline, while accounting for a possible spillover effect between groups – and projects. IFES’ Applied Research Center, with the support of academic experts, was able to circumvent these technical difficulties in the DR Congo and conduct an impact survey about the first phase of the program, related to decentralization. It concluded that there was a net difference of knowledge between target groups and other groups, with the program clearly leading to a greater understanding of the topic by citizens of any age, gender and social category.

Turn-out in the election is sometimes considered a good indicator – but it must be handled with care when it comes to comparison, as contexts and candidates change from one election to another, or from one region to another. Impact of get-out-the-vote campaigns on voter motivation can be marginal compared to the impact of these other factors.

When one knows the agitation which has surrounded the Congolese election of November 2011, and the technical flaws of the process which were confirmed by international observation missions, I have no doubt that more serious violence could have easily occurred in the DRC these last months. I genuinely believe IFES’ voter education programs have contributed to minimizing the number of incidents and encouraging various stakeholders to prioritize negotiation. 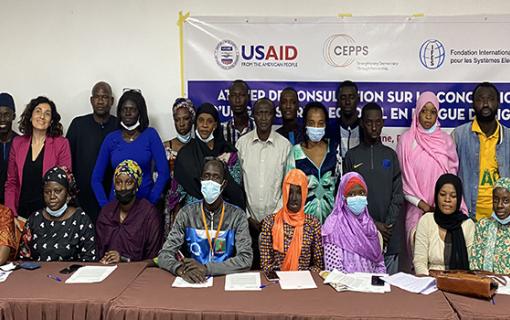