Long time opposition leader Alpha Conde was elected president in the 2010 democratic elections in Guinea, following the 2008 coup d'état that removed authoritarian ruler Lansana Conté from power. This marked an unprecedented opportunity for the solidification of democracy in Guinea. However, President Alpha Conde’s campaign for a third presidential term in 2020 and the military coup of 2021 demonstrated the vulnerabilities of Guinea’s democracy.

After initial programing challenges due to the 2014 political crisis and the Ebola epidemic, IFES reoriented its programs to strengthening civil society’s capacity to promote democracy, dialogue and citizen participation in partnership with the Regional Councils of the Organizations of Civil Society. This collaboration led to the creation of the Civic and Electoral Education Centers (CECE) in Conakry’s municipalities, with funding from both the European Union (EU) and the U.S. Department of State. The CECEs led awareness-raising campaigns on the Ebola crisis. Since July 2019, the National Democratic Institute and IFES are implementing the Building Electoral and Accountability Capacities, Orderly Norms and Democratic Governance project (BEACON-DG), funded by the United States Agency for International Development (USAID). Through BEACON-DG, IFES supports the Independent National Election Commission (CENI), the judiciary and civil society organizations (CSOs) to build their capacity in electoral dispute resolution.

Under the BEACON-DG project, IFES supports the CENI, the judiciary and CSOs in building their capacity to engage constructively in inclusive, peaceful and transparent election dispute resolution. IFES has built the capacity of election commissioners, trained dozens of judges who serve as election officials and assisted the CENI and the Constitutional Court to collect election-related complaints or irregularities on Election Day.

IFES spearheaded the creation of a national network of more than 30 trusted civil society organizations: the Synergy of Civil Society Organizations for the Prevention of Electoral Conflicts and their Resolution (SYNCERE). Alongside other election observers, SYNCERE led the publication of an election observation statement calling for peace and social cohesion in the post-electoral period. IFES has assisted SYNCERE to develop the citizen manifesto, or “Cahier Citoyen,” for dialogue, the first document in Guinea to provide Guinean stakeholders with a roadmap for political dialogue to resolve current and prevent future election-related crises. 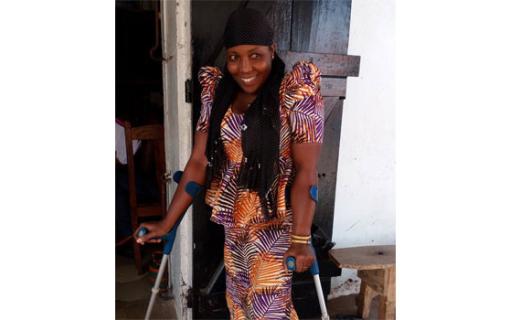 Fatoumata Camara Discusses Advocating for Persons with Disabilities in Guinea Fatoumata Camara, a Guinean with a physical disability, is the Deputy Coordinator for the Association of Persons Living with a Disability of Mamou, Guinea. In this Q&amp;A, Camara discusses barriers to electoral and political participation that Guineans with disabilities face, the role of civic education in reducing those barriers and major accomplishments of the disability rights movement in Guinea. July 7, 2016
Election FAQ 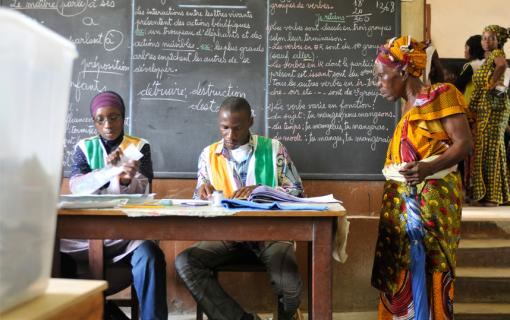 Elections in Guinea: 2015 Presidential Elections On October 11, citizens of Guinea will head to the polls to vote in their country’s second democratic presidential election. October 6, 2015
Publication Brochure/Fact Sheet Guinea: Support Political and Electoral Processes Guinea held a legislative election on September 28, 2013, after six years of delays attributable to a variety of factors, including a military&nbsp;coup d’état. This election, despite being preceded by a series of violent demonstrations, was conducted peacefully, and was widely considered a positive step in Guinea’s democratic transition. Challenges persist, however, that must be addressed prior to the presidential election that is currently scheduled to take place in 2015. The Independent National Electoral Commission (CENI) continues to struggle to demonstrate the institutional and operational capacity necessary to administer elections in a credible and transparent manner and the promotion of electoral reform is further inhibited by a generally weak understanding among citizens of democratic principles, electoral processes, and decentralization.&nbsp; January 28, 2015
News and Updates Press Release Health Crisis in West Africa Erodes Peace and Democratization Efforts The International Foundation for Electoral Systems (IFES) is deeply concerned about the Ebola outbreak in West Africa. This health crisis has resulted in more than 1,350 reported deaths so far in a region that has been moving steadily toward peace and democratization. This outbreak of the Ebola virus has already killed more people than any other Ebola epidemic in history. August 22, 2014
News and Updates Interview/Speech/Testimony Hope on the Horizon: Guinea’s 2013 Legislative Elections Guinea held parliamentary elections on September 28, 2013 &ndash; years after the elections were due. IFES Chief of Party in Guinea Elizabeth C&ocirc;t&eacute;&nbsp;answers questions on what they mean for Guinea&rsquo;s democratic development. October 2, 2013