On June 16, for the first time in Guatemalan history, Guatemalan citizens had the opportunity to exercise their right to vote from outside their country. At four polling centers in Silver Spring, Maryland; New York, New York; Houston, Texas; and Los Angeles, California; Guatemalans in the United States (U.S.) lined up even before the polls opened at 7 a.m. to cast their historic votes.

Julia Sánchez in Silver Spring was the first-ever Guatemalan to vote from the U.S. and the first to vote in the 2019 general elections. Sánchez, who has lived in the U.S. for 14 years, brought her three children, all under the age of 12. She was proud to contribute to fostering a democratic culture and serve as a model of democratic participation for her kids. She was featured in many Guatemalan media outlets because she symbolized the hope and emotion felt by many Guatemalans about expanding the franchise to those who have moved abroad, particularly to the U.S., which plays an important economic role, and now are acknowledged politically.

She symbolized the hope and emotion felt by many Guatemalans about expanding the franchise to those who have moved abroad. 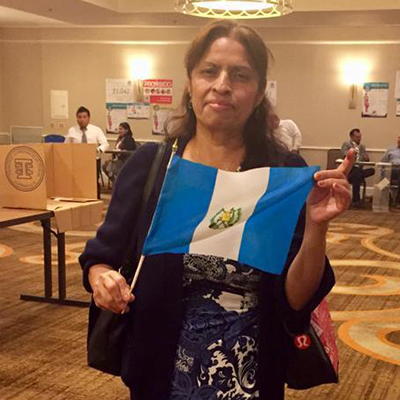 A voter in Silver Spring holds up the Guatemalan flag and her inked finger after casting her ballot. © TSE

In 2016, Guatemala passed landmark reforms to its Electoral and Political Parties Law (LEPP), including provisions to allow Guatemalans living abroad to vote for president and vice president. The revised LEPP expanded the powers of the Supreme Electoral Tribunal (TSE), the independent government entity that administers elections and electoral justice. In addition to building an out-of-country voting (OCV) system, the TSE implemented new regulations on campaign finance and political advertising in the media, a new electoral calendar and other major changes intended to make the electoral process more transparent and inclusive.

This year marks the first elections since passage of the reforms, and the TSE had to create new systems to implement its new responsibilities. The International Foundation for Electoral Systems (IFES) has been working alongside the TSE throughout the implementation process. IFES accompanied the creation of the TSE’s Specialized Unit on Out-of-Country Voting (UEVE) and collaborated on the design of the OCV system. From the planning phase, IFES electoral technology experts worked with the UEVE on the technical aspects of results transmission from the four polling centers to the TSE’s National Information Center in Guatemala City. IFES accompanied four simulations of the OCV results transmission system in the three days before the election, ensuring that systems were in place to transmit transparent and verifiable results while identifying and correcting any inconsistencies. In the days after Election Day, IFES experts will contribute to the UEVE’s lessons learned exercise, preparing for the second-round presidential election on August 11 and the start of the new electoral cycle for 2023.

The first Guatemalan OCV represents a meaningful step for the country’s democracy. Operationally, the voting went smoothly, with materials and personnel arriving securely and on schedule, voting centers operating effectively and results arriving to Guatemala shortly after polls closed. Coming off a first out-of-country vote with many successes and lessons learned, the TSE will improve and expand OCV so that Guatemalans living abroad can exercise their right to a political voice in future elections.

The TSE will improve and expand OCV so that Guatemalans living abroad can exercise their right to a political voice in future elections.

IFES’ “Electoral Governance and Reforms” project in Guatemala is supported by the United States Agency for International Development through the Consortium for Elections and Political Process Strengthening (CEPPS). IFES works together with the TSE to improve governance of key institutions and increase citizens’ voices, particularly by collaborating on the implementation of Guatemala’s LEPP reform passed in 2016. Activities under this objective include accompanying OCV by cooperating with the TSE on setting up and testing OCV technological systems, monitoring OCV registration, conducting voter education through public service announcements and social media, and coordinating voting center logistics.

*Marit Björnlund is a program coordinator for the Americas at IFES.