JCE President Dr. Julio César Castaños and Magistrate Carmen Imbert, a member of the JCE Plenary Assembly and coordinator of the Academic Council of the EFEC, welcomed the delegation to the Dominican Republic and delivered opening remarks for the exchange program. Over the course of the program, EFEC Director Carmen Figueiras and staff delivered presentations and led discussions on coordination of electoral, civil society and continuing training; civic education; research and publications; administrative and financial management; the EFEC’s hiring and orientation; and public relations and communications. 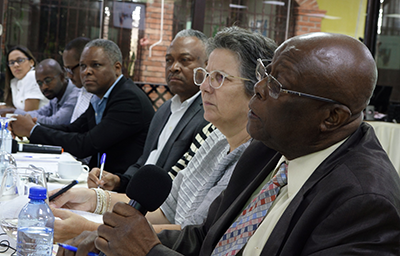 A member of the Haitian delegation participates in a discussion during the exchange.

The exchange served as a platform for the Haitian delegation to acquire an in-depth understanding of the EFEC and for the Dominican hosts to learn about the Haitian context. The presenters outlined the structure, role and functions of the EFEC, its level of autonomy, relationship with the JCE and connection with external electoral stakeholders like civil society and political parties. Participants engaged with the EFEC’s staff to gain a better understanding of the course offerings, activities and methodologies used. The program also covered aspects of the EFEC’s operational functioning such as institutional planning, budgeting and funding.

The event was covered by both the Haitian newspaper Le National and the Dominican newspaper Hoy. During the exchange, Councilor Bernard, quoted in Hoy, remarked that “We intend to establish a training institute, which is included in the law, although Parliament has not approved it.” Bernard was referring to the electoral law proposal developed by the CEP, modified by the Executive and submitted to Parliament for approval in late 2018.

The Haitian CEP delegation’s exchange visit to the Dominican Republic’s JCE was part of IFES’ implementation of the “Elections and Political Processes” program, funded by the United States Agency for International Development in Haiti through the Consortium for Elections and Political Process Strengthening (CEPPS). The program seeks to strengthen the organizational capacity of the CEP.  By leveraging its existing partnerships with various election management bodies in the region, IFES facilitates exchanges that contribute to the sustainable administration of credible, inclusive and transparent elections.

*Sophie Lagueny is a country director for Haiti and Marita Ivonne Jimenez is a program associate for the Americas at IFES.