“Before the training I was only focused on canvassing and small meetings, but now I can invite media and give press conferences without anxiety. Recently I took part in a press conference that was jointly organized by civil society and women political candidates.”

After living for nearly a decade in a camp for internally displaced persons, Jency, a 28-year-old woman from Sri Lanka’s Northern province, longed to contest for public office so that she could help others “thrive in a post-war context.” Another woman from the Eastern province, Subathra, witnessed first-hand how poor workers within her community were threatened by dangerous working conditions and wanted to become an elected leader so she could better promote laborers’ rights in the East. Somawathi, a woman from the North Central province, is a community business leader who is driven to enter politics by the need to address the violence and harassment against Sri Lankan women that hinders their ability to participate in the economic sphere. If elected as local government representatives, these and hundreds of other women leaders would enrich Sri Lanka’s democratic process by ensuring that citizens’ diverse needs are better addressed in local policy making. However, in order to strengthen their chances of winning a local government seat, women leaders across Sri Lanka had to develop the practical campaign skills needed to effectively contest for office. 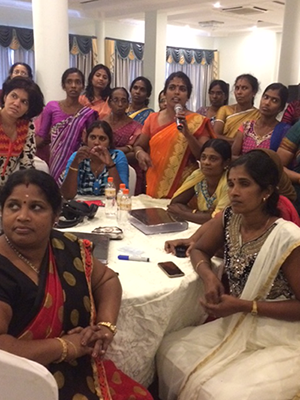 Sri Lanka implemented its first ever women’s quota during the February 2018 local government election, marking a historic opportunity to increase women’s representation from 1.8 percent to as much as 25 percent. Ahead of the election, the International Foundation for Electoral Systems (IFES) carried out a women’s leadership program, She Leads SL, that equipped 458 Sinhalese, Tamil and Muslim women with practical campaign skills including fundraising, networking and coalition building, campaign messaging, social media use, public speaking, and development of personal campaign action plans. As a result of the She Leads SL training, nearly 43 percent of alumnae participated as candidates in the 2018 local government elections, utilizing skills gained from the training to elevate their campaigns.

Inspired by She Leads, Jency both contested for office and assumed a new role as a community leader, working with other alumnae to conduct door-to-door voter outreach that educated 1,200 women in the North on the new quota provision and the importance of women’s political participation. As Jency noted, “Trainings like this are necessary for women in war affected areas like me, to encourage them to come out of their shells and to give them confidence to engage in politics.” When Subathra returned to her community, she used her campaign action plan, developed during the She Leads training, to identify new voter groups she could target in order to mobilize support for her candidacy and platform issue of labor rights. 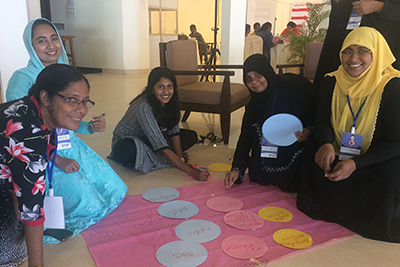 Similarly, Somawathi applied newly developed skills to elevate her profile as a candidate. In the weeks following She Leads SL, Somawathi met with the deputy inspector general of police to highlight issues of violence against women in her community: “As a woman, I used to be shy to speak to people but I just I walked up to him and spoke to him with confidence. I even asked for his phone number. He is a great contact I have in my network now.” Somawathi also used her new public speaking skills to address a rally of over 100 people, during which she identified gender issues within the political party and called on the party leadership to integrate women’s rights into its campaign platform.

“Despite our different religious backgrounds, as women we face the same challenges when engaging in politics. It is important as women to work in solidarity and support each other.”

These are just a few of the examples from the 195 She Leads alumnae who contested for the 2018 local government elections. Other alumnae set up campaign Facebook pages and livestreamed their campaign events through social media platforms; prepared press releases; gave media interviews; and conducted targeted outreach to new groups of voters. One alumna used knowledge gains to improve education outreach to her community: “Now whenever I go out canvassing, I talk to people about the new electoral system, women’s representation, how to vote, and so on. I think this is what a community leader should do and even though I am still a candidate, I am now also fulfilling the role of a community leader.” Still another alumna established a cross-community network of women leaders to continue to engage women across ethnic divides: “There are about 100 of us. It is a forum for us to communicate with each other on shared goals irrespective of party differences.” 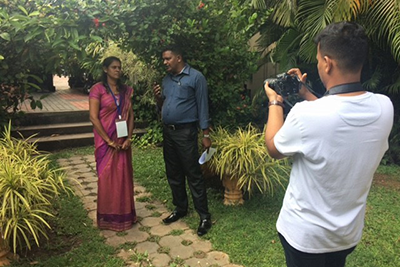 The improvement of women’s engagement as political, economic and community leaders is one integral component in addressing the social divisions and inequalities that inhibit development of inclusive democracies. Outcomes from She Leads underscore the positive impact that skills-based women’s leadership programs have on elevating women as community advocates and political leaders, advancing the stability and resilience of a country’s democratic process.

She Leads is an IFES flagship women’s political empowerment program that has been implemented in Cambodia, Myanmar, Indonesia, and Sri Lanka. She Leads SL was part of the Australian Department of Foreign Affairs and Trade-funded “Promotion of Women’s Electoral Representation” (POWER) program.