Violence against women in politics is a substantial threat to the integrity of the electoral process, affecting women’s participation as voters, candidates, election officials, activists and political party leaders and undermining free, fair and inclusive democratic processes.

Elections in Papua New Guinea (PNG) are characterized by violence and tribal politics that contribute to a high prevalence of violence against women in elections (VAWE). A new report from the International Foundation for Electoral Systems (IFES) assesses VAWE in PNG following the 2017 national elections, drawing on fieldwork, research and IFES’ experiences operating in PNG. The analysis is organized into three key factors that influence the incidence and impact of VAWE: 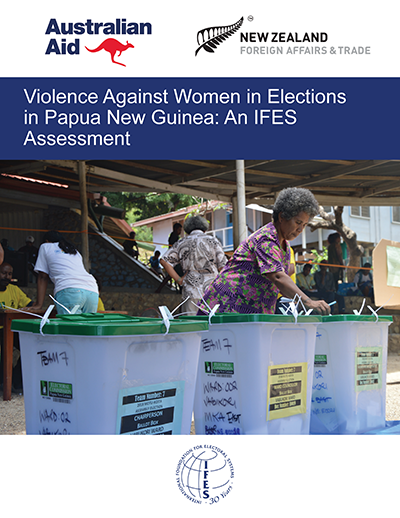 Violence Against Women in Elections in Papua New Guinea: An IFES Assessment

Based on the assessment’s findings and consultations with government officials, representatives from civil society and women’s organizations and other political actors, the report presents recommendations for mitigating and preventing VAWE in PNG in the future, including the implementation of Temporary Special Measures, strengthening of civic and voter education curricula, gender-sensitive electoral security and programs targeting hate speech and VAWE online.

Intergenerational Relationship-Building in the Mekong Region To counter mis- and disinformation during the COVID-19 pandemic, the International Foundation for Electoral Systems collaborated with civil society organizations working in local communities in Cambodia, Thailand and Vietnam. August 11, 2022