The Port Moresby-based Papua New Guinea Electoral Commission (PNGEC) commemorated the day with its second-annual International Women’s Day celebration, which included speeches by PNGEC Deputy Commissioner John Kalamoroh, Director of Operations Margaret Vagi and IFES Chief of Party for Papua New Guinea and the Pacific Islands Paul Rowland. The PNGEC and IFES acknowledged the growth of women in lead management positions, with an increase from one provincial election manager to three managers and four more women in acting manager roles over three years. Since engaging with the PNGEC in 2015, IFES has worked to build the capacity of female electoral officials, mainstream gender in electoral operations and planning and increase awareness of the importance of gender equality in elections. Last year, the PNGEC elevated gender equity and social inclusion (GESI) to be a strategic pillar for the first time in its Corporate Plan 2018-2022, committing the PNGEC to mainstreaming GESI across internal operations and external engagements.

For International Women’s Day, the IFES team in Bougainville joined local civil society organizations, the Bougainville Women’s Federation, Leitana Neham Women’s Development Agency and other partners on a peace march through Buka Town. Themed “We Are More Powerful Together,” the march was a statement against recent violence in Bougainville and a call for unity ahead of the Bougainville referendum slated for October 2019. Leitana founder Helen Hakena explained, “We don’t want to be divided [moving toward the referendum], so today the women are calling for [unity].” Women in Bougainville played a key role in the peace negotiations, which ended the decadelong Bougainville conflict in 2001, and have become mediators and voices for peace in the region in the intervening years.

A photo gallery of both events can be found here or by clicking on the image below. 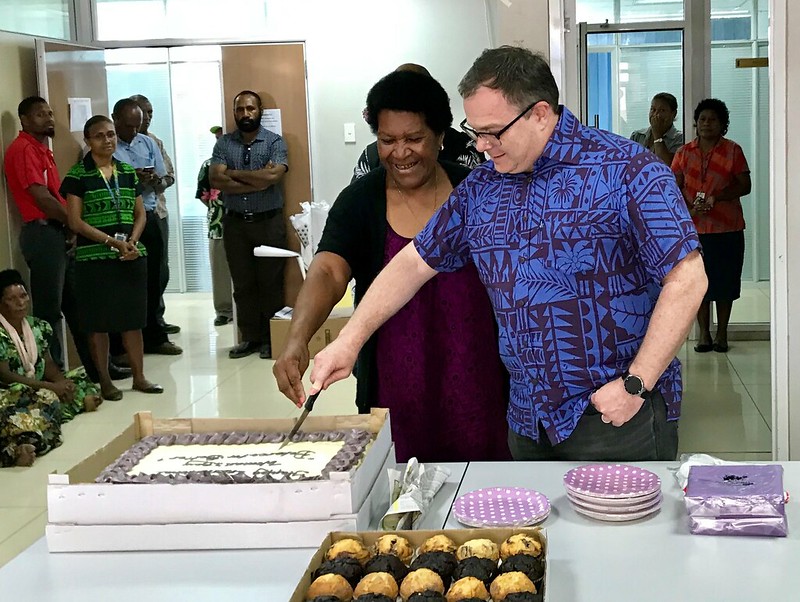 Paul Rowland cuts the cake with a PNGEC representative at their celebration luncheon.