The International Foundation for Electoral Systems (IFES) is working with local women’s and human rights organizations in Haiti to update the National Strategy on Gender and Elections (SNGE) ahead of the country’s October 2019 legislative elections. The Provisional Electoral Council (CEP) and the Ministry for Women’s Affairs and Women’s Rights (MCFDF) first developed the strategy in 2014 with IFES’ support. This new update, requested by the CEP and MCFDF, allows IFES to build on its ongoing collaboration with both institutions and apply learning from the past five years to strengthen the SNGE as an instrument for the protection of women’s electoral rights in Haiti.

On January 15, IFES conducted a workshop on the SNGE update with 18 representatives from 14 prominent local women’s and human rights organizations and additional representatives of the United States Agency for International Development, National Democratic Institute (NDI), United Nations Entity for Gender Equality and the Empowerment of Women and Embassy of Canada. 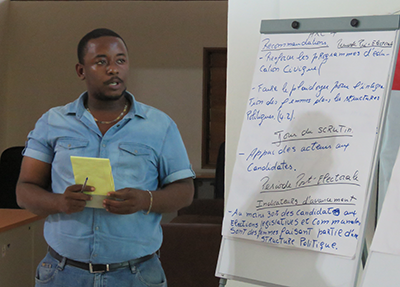 One of the representatives leads a workshop discussion.

The workshop served as a platform for participants to provide input on and suggest changes to each of the seven themes addressed by the SNGE: legal and regulatory framework, elections management, women voters, women and decision-making, political parties, media and violence against women in elections. IFES also suggested that participating organizations show their support for provisions in the draft Electoral Law currently in Parliament that bolster the 30 percent quota and requirements for more women on political parties’ candidate lists for all elections. The group agreed to draft a letter supporting the provisions and advocating for Parliament to retain and adopt these provisions. The Consortium for Elections and Political Process Strengthening (CEPPS) will support the organization of a press conference and the publication of the letter signed by all 14 organizations in the country’s leading newspaper, Le Nouvelliste.

Since 2014, IFES has been working with the CEP to mainstream gender-sensitive legislation and practices that contribute to increased political participation and electoral representation for women. In the initial SNGE development in 2014, IFES facilitated meetings with key stakeholders and the CEP and the MCFDF officially adopted the strategy in 2015. More recently, IFES’ collaboration with the CEP and MCFDF has included meetings to discuss adding key provisions to the electoral law that strengthen requirements for female participation and stipulate concrete provisions, such as that one out of every three candidates in political parties’ candidate lists must be a woman.

IFES will submit the updated SNGE document to the CEP and MCFDF for review and approval by February 15, and then the institutions will work together to implement and monitor the recommendations with the support of IFES throughout the process.

Established in 1995, CEPPS pools the expertise of three premier international organizations dedicated to democratic development: IFES, the International Republican Institute and NDI. CEPPS has a 20-year track record of collaboration and leadership in democracy, human rights and governance support, learning from experience, and adopting new approaches and tools based on the ever-evolving technological landscape.

*Marita Jimenez is a program associate for the Americas at IFES.