Zimbabwe will hold its much-anticipated harmonized elections on July 30, 2018, when citizens will vote for president, 201 constituency seats in the National Assembly, and seats in the urban and rural local authorities. These will be the country’s first elections since independence without the participation of Robert Mugabe, who ruled Zimbabwe for 37 years and resigned in November 2017 amid pressure from the military, his party and the public. President Emmerson Mnangagwa, the former vice president who took over from the ousted Mugabe, promised free and fair elections this year.

The International Foundation for Electoral Systems (IFES) has been working to strengthen the capacity of Zimbabwean civil society organizations (CSOs) and community-based organizations to promote credible, inclusive and transparent elections. Under the United States Agency for International Development-funded Strengthening Election Administration and Civic Participation program, IFES provided technical and financial support to 15 CSOs during the biometric voter registration (BVR) phases in the lead-up to the 2018 elections. These CSOs carried out voter education initiatives to provide potential voters with needed information about the BVR exercise across the country, contributing to the registration of approximately 500,000 voters as of May 2018. The CSOs also monitored the voter registration process to ensure transparency and accountability of the Zimbabwe Electoral Commission. 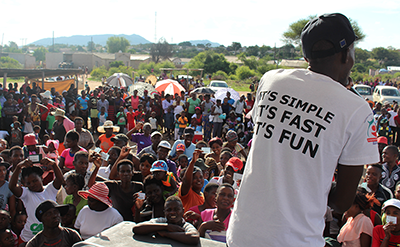 As part of its technical support, IFES worked with Well Made Strategy to help all partner CSOs develop coherent plans for effective voter education campaigns and to establish a Social Media Working Group to encourage cross-organizational networking as well as greater utilization of social media. Analysis of Zimbabwe’s elections in 2008 and 2013 indicates that electoral information was communicated essentially via newspapers, radio and TV programs. IFES identified social media as a way to increase public access to electoral information, as estimates of Zimbabweans with a mobile phone ranged from 60 to 90 percent of the population, with mobile phone data usage growing considerably each year. Moreover, making use of social media is critical to encouraging younger citizens, especially first-time voters, to register to vote.

As a result of the social media initiative, all CSOs carried out dynamic and robust activities on different social media platforms with creative and tested messaging. For example, one IFES partner initiated the #BallotBuddies campaign in January and February 2018, distributing 60 messages online to encourage peer-to-peer discussion and motivate youth to register. Another CSO created 30 WhatsApp groups constituting 7,580 college ambassadors and members of their communities. A Facebook page was also created where young people discussed electoral concerns. The #iVote2018 hashtag was created by another CSO partner to provide a platform for young people from tertiary institutions, political parties, and gender and women’s groups to discuss their experiences during the BVR process. Various video clips were developed and shared featuring youth from different backgrounds.

Currently, IFES is identifying six CSOs to lead a “get out the vote” campaign targeting women, persons aged 18 to 35 and other marginalized communities, as well as to conduct oversight of the electoral process and advocate for equal access of voters to the polls.

*Shiyun Lu is a program coordinator with IFES' Africa division.