Irena Hadžiabdić has spent the past 26 years in the field of election management, first with the Organization for Security and Co-operation in Europe (OSCE), then as executive director of the International Foundation for Electoral Systems (IFES) in Bosnia and Herzegovina (BiH). She was also the executive director of the Association of Election Officials in BiH (AEOBiH). In 2007, she was appointed by the BiH Parliamentary Assembly as a member of the BiH Central Election Commission (BiH CEC). On April 27, 2016 she was reappointed member of the BiH CEC after the expiration of her first seven-year mandate. She served twice as a President of the BiH CEC (in 2010 and 2017).

She represented the BiH CEC at the Executive Board of the Association of European Election Officials (ACEEEO) and at the Oversight and Audit Committee of the Association of World Election Bodies (AWEB). She has observed and assessed elections in 17 countries with OSCE’s Office for Democratic Institutions and Human Rights (OSCE ODIHR), the International Republican Institute (IRI) and the National Democratic Institute (NDI). In 2013, she received an International Electoral Award for outstanding achievements in election management. In 2019, she received person of the year award for public administration in BiH.

As presenter and lecturer she took part in more than seventy expert conferences and workshops. She is author of two books, seven publications and more than 20 articles on elections and political party financing.

Irena Hadžiabdić graduated from the Belgrade Faculty of Law. She holds a M.S. in European Union policy, law and management from Robert Gordon University, Aberdeen and a Ph.D. in juridical science from the Faculty of Law in Zenica. 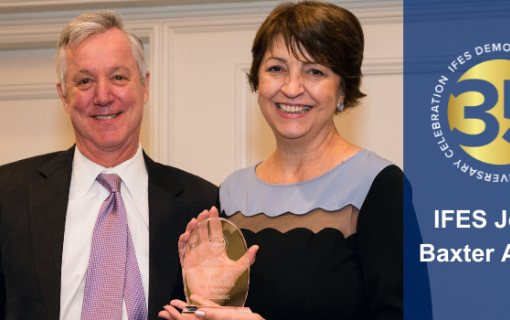 IFES Baxter Award Honors First Woman President of BiH Electoral Body On June 13, 2022, the International Foundation for Electoral Systems (IFES) presented its 2022 Joe C. Baxter Award to Dr. Irena Hadžiabdić, the first woman to serve as President of the Bosnia and Herzegovina (BiH) Central Election Commission (CEC) and a member of the IFES Board of Directors. June 29, 2022
News and Updates Feature 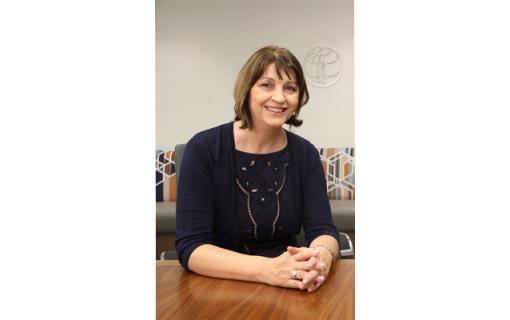 Gender Equality in Election Administration, IFES Board of Directors IFES Board Director Irena Hadžiabdić is a former IFES employee who serves as the first female chair of the Bosnia and Herzegovina (BiH) Central Election Commission (CEC). In this video interview, she discusses her role as a pioneer and a woman leader in global election administration. March 21, 2017
News and Updates Feature Video: Bosnia and Herzegovina Prepares for Critical 2018 Elections On March 7, 2017, the International Foundation for Electoral Systems (IFES) held a panel discussion on the current state of affairs in Bosnia and Herzegovina. March 14, 2017
News and Updates Feature 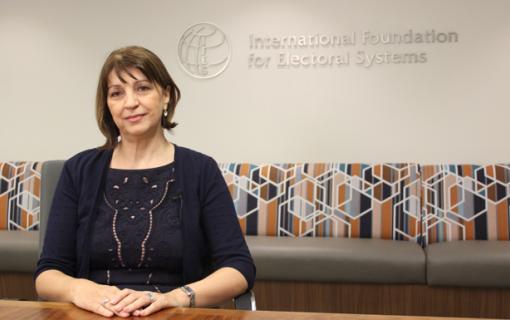 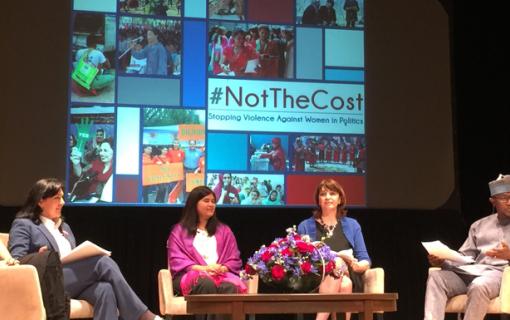 Irena Hadžiabdić Discusses Reducing Election Violence Against Women Irena Hadžiabdić, an Election Commissioner for Bosnia and Herzegovina’s Central Election Commission and an IFES Board Director, was a special guest at the National Democratic Institute’s #Not the Cost Conference. Hadžiabdić was there to introduce IFES’ new “Reducing Election Violence Against Women” (REVAW) framework. March 23, 2016
News and Updates Feature IFES Board Director Irena Hadžiabdić Discusses Her Career On March 3, 2015, staff from the International Foundation for Electoral Systems (IFES) met with one of IFES’ newest Board Directors, Irena Hadžiabdić, for a brief introduction to her career and to gain insights into how to build a career in election management and administration. IFES President and CEO Bill Sweeney introduced Hadžiabdić, a former IFES employee who previously served as the first female Chair of the Bosnia and Herzegovina (BiH) Central Election Commission (CEC) and currently is the only female member of the Commission. “Irena Hadžiabdić is a pioneer and a woman leader in global election administration,” Sweeney added. March 6, 2015