Violence against women in politics is a substantial threat to the integrity of the electoral process, affecting women’s participation as voters, candidates, election officials, activists and political party leaders and undermining free, fair and inclusive democratic processes.

While women in Bougainville, an autonomous region within Papua New Guinea (PNG), have greater access to politics and decision-making than their counterparts in other parts of PNG, they still face significant challenges as they seek to participate in the electoral process. A new report from the International Foundation for Electoral Systems (IFES) assesses violence against women in elections (VAWE) in Bougainville following the 2015 Autonomous Bougainville Government elections and 2017 PNG national elections, drawing on fieldwork, research and IFES’ experiences operating in Bougainville. The analysis is organized into three key factors that influence the incidence and impact of VAWE: 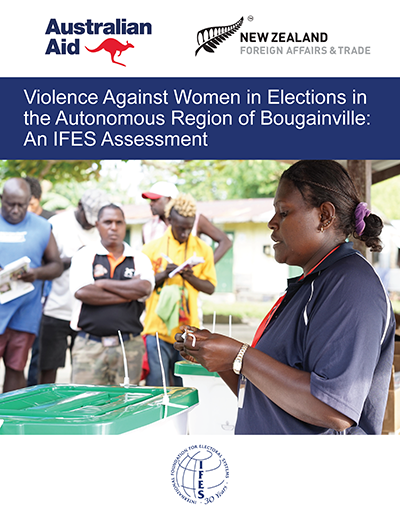 Violence Against Women in Elections in the Autonomous Region of Bougainville: An IFES Assessment

Based on the assessment’s findings and consultations with government and elected officials, representatives from civil society and women’s organizations and other political actors, the report presents recommendations for mitigating and preventing VAWE in Bougainville in the future, including voter awareness and education campaigns, increased support to female candidates and elected officials and collaboration with political parties to encourage the provision of resources to female candidates.

Violence Against Women in Elections in the Autonomous Region of Bougainville: An IFES Assessment is supported by the Australian and New Zealand Governments in partnership with Papua New Guinea and the Autonomous Region of Bougainville. The contents are the sole responsibility of IFES and do not necessarily reflect the views of the Australian or New Zealand Governments.