Iraq has undergone dramatic change in the past decade. The U.S.-led war in Iraq that began in 2003, and the subsequent de-Ba’athification process led by the Coalition Provisional Authority, spike in sectarianism, advancement by the Islamic State (IS) and push by the Kurds for independence, all continue to impact the country’s political and security environment.

It is within this complex context that the International Foundation for Electoral Systems (IFES) worked in Iraq for the last 12 years, providing capacity building for Iraq’s election system from 2003 until September 2015.

Iraq’s first democratic elections occurred in January 2005, when eight million Iraqis elected a Transitional National Assembly (TNA). The TNA soon drafted a constitution that was put up for referendum in October 2005; it was primarily backed by Shia and Kurdish groups but failed to receive significant buy-in from Sunnis. Iraq next held parliamentary elections for a permanent national assembly, the Council of Representatives (CoR), in December 2005.

2005 was a crucial year for the establishment of a more representative Iraqi system with democratic institutions. During this critical period, under the U.S. Agency for International Development (USAID)-funded “Electoral Technical Assistance” program, IFES’ staff and technical advisers supported the Independent Electoral Commission of Iraq (IECI), as well as Iraqi civil society, by guiding the IECI through the voter registration process, operational planning, voter outreach, and procurement of supplies for Election Day. IFES also oversaw the training of hundreds of thousands of poll workers.

Concurrently, through the “Election Violence Education and Resolution” (EVER) project in Iraq, IFES brought together a coalition of 84 Iraqi non-governmental organizations around the issue of election violence to form the Iraq Without Violence Network. IFES trained network members in election violence monitoring and conflict resolution so they could serve as monitors and conduct bridge-building activities with community leaders and other election stakeholders.

The completion of the historic 2005 electoral cycle resulted in the election of a permanent, 275-member CoR on December 15, 2005 and the subsequent formation of the Iraqi government in May 2006, headed by then-Prime Minister Nouri Al-Maliki. The success of the IECI in managing three electoral events in one year is a strong testament to the skills it was able to gain in a short time frame. In 2007, Iraq’s permanent election body, the Independent High Electoral Commission (IHEC), was created.

Evidence of the success of the IHEC’s work at the local level came in January 2009, when Iraq held governorate-level elections, the first major electoral event since 2005. Subsequently, the IHEC managed the presidential and parliamentary elections in the semi-autonomous region of Kurdistan, which occurred on July 25, 2009.

IFES also provided key support to the IHEC’s implementation of the March 2010 CoR elections, and advised the IHEC as it carried out a high-profile and politically-sensitive post-election recount after the elections. The 2010 Baghdad recount was the first national recount in Iraq and presented a significant challenge to the IHEC. Successful implementation of the recount demonstrated the IHEC’s capabilities. Results were accepted by the relevant political parties and did not spark violence (although the security situation remained volatile). Political actors in Iraq recognized the IHEC as an independent and credible electoral management body, as its independence and the quality of its work were praised on several occasions following the process.

In the next few years, Iraq’s political and security landscape shifted dramatically, shaped by the withdrawal of U.S. forces in December 2011, the Syrian civil war, and the subsequent rise of IS.

Since 2011, IFES has assisted the IHEC in administering two nationwide elections – the Governorate Council elections in April 2013 and the CoR elections in April 2014 – through the 2011-2015 “Elections Support Project.” The April 2013 Governorate Council elections marked the first national election following the withdrawal of U.S. troops in 2011. In the lead up to these elections, sectarian tensions tied to Sunni marginalization by the Shia-led government resulted in large-scale protests and rapidly escalating political tension. In this volatile context, IFES supported governorate-level elections by assisting the IHEC with vote tabulation, strategic and voter education to help the IHEC ensure accessibility, and accurate results.

Political tensions continued surrounding the CoR elections in April 2014. Pressure on the IHEC to exclude several candidates from the voter roll led the IHEC Board of Commissioners to threaten to resign in order to maintain independence, leading many to praise the independence of the IHEC.

IFES also launched a sub-grants program to strengthen partnerships with local civil society organizations, supporting them to increase voter outreach to women, internally displaced persons (IDPs), people with disabilities, first-time voters, illiterate people, and marginalized communities. The program aimed to safeguard the broadest representation possible among Iraqi voters. Despite the concerns about security, polling was successfully conducted across the country with few incidents of violence, and the elections were heralded as free and fair by international monitors.

The 2014 elections resulted in a victory for Prime Minister Nouri Al-Maliki’s State of Law bloc. However, popular discontent with Al-Maliki led the CoR to elect a new Prime Minister, Haider Al-Abadi. As the CoR undertook government formation, IS began a campaign across northern Iraq, causing tens of thousands to flee.

Since the 2014 elections, IFES has continued to assist the IHEC with developing and implementing a long-term strategy. Additionally, the opening of the IHEC Electoral Education Institute paved the way for offering educational and training materials and programs to electoral stakeholders. Since the elections, the IHEC has also been implementing a transition to electronic voting cards to reduce fraud, and has implemented continuous voter registration, registering approximately two million new Iraqi voters since June 2015.

IFES has worked closely with the IHEC to monitor and evaluate its own performance in managing elections. Accordingly, IFES conducted two national public opinion surveys – one after the 2013 Governorate Council elections and the second following the 2014 CoR election. The 2014 survey found that Iraqis were largely satisfied with the process and procedures of the April 2014 elections, with over 84 percent indicating they were very or somewhat satisfied. Iraqis were also largely confident in the ability of the IHEC to organize credible elections, with 79 percent saying they have a great deal or fair amount of confidence and 71 percent saying they agree that the IHEC is an independent institution without political influence affecting its operations and decisions.

Iraq will continue to face massive security challenges in the years ahead. Some experts believe the country may slip into civil war, risking Iraq’s partition into three independent regions. Unfortunately, the transition from decades of dictatorial rule to democracy after the fall of Saddam Hussein's Ba'athist regime has failed to meet Iraqi citizens’ aspirations. The underlying ethnic and political divide continues to cast doubt over elections, legal reforms and constitution making as legitimate tools of democratization. Despite the lack of progress, the international community should remain engaged in continuing to build the institutions that will form the backbone of an emerging democratic society. Free and fair elections, an independent judiciary, an engaged civil society, moderate political parties, independent media, a responsive government and Parliamentarians, are all critical for the future of political pluralism in Iraq. IFES continues to remain engaged with electoral stakeholders so that it can build on its past work and support the critical area of electoral and political participation in Iraq. 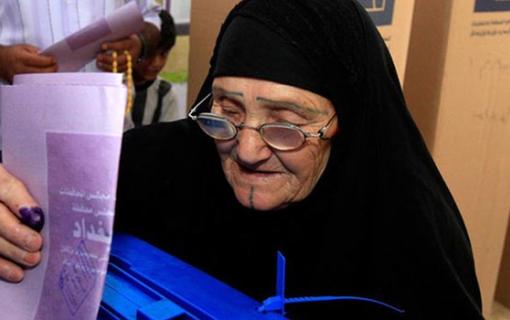 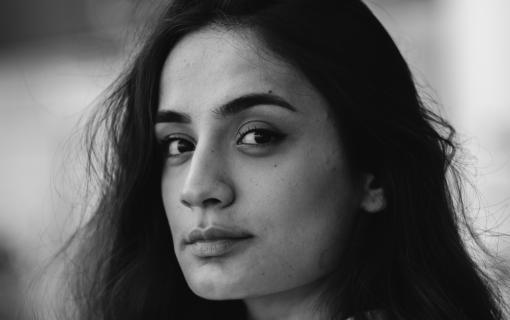 Gender Analysis of Iraq's Electoral and Political Process Delivering an inclusive election is an important entry point to ensuring that all Iraqis are able to build a more developed democracy that is responsive and accountable to women and men alike. A new IFES report identifies gender gaps and opportunities to promote political inclusion and mitigate obstacles to participation faced by Iraqi women. October 31, 2019
Election FAQ 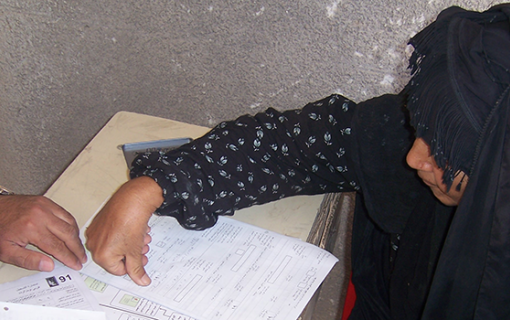 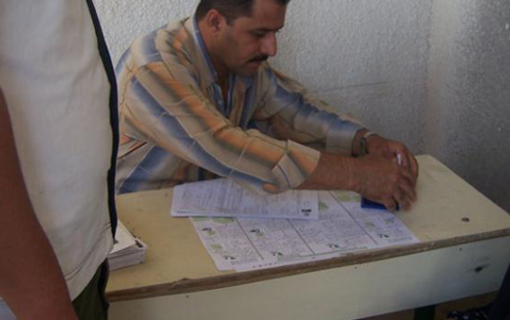 Technical Assistance to Election Management Bodies Iraq has undergone dramatic change in the past decade. The U.S.-led war in Iraq that began in 2003, and the subsequent de-Ba’athification process led by the Coalition Provisional Authority, spike in sectarianism, advancement by the Islamic State (IS) and push by the Kurds for independence, all continue to impact the country’s political and security environment.&nbsp;It is within this complex context that the International Foundation for Electoral Systems (IFES) worked in Iraq for the 12 years, providing capacity building for Iraq’s election system from 2003 until September 2015. November 3, 2017
Publication Survey Opinions on the Electoral Process and Democracy in Iraq Following the April 2014 Council of Representatives elections, IFES conducted a public opinion survey of voting-age citizens in Iraq. May 15, 2015
News and Updates Feature Voter Registration Improvement is a Priority for Iraqi Leadership Having a reliable voter register is a key concern for election management bodies. An accurate voter register ensures voter access to, and the integrity of, the electoral process. Launched in October 2011, the International Foundation for Electoral Systems’ (IFES) Iraq Elections Support Project (ESP) provides technical assistance to the Independent High Electoral Commission (IHEC), the Iraqi election management body, in various areas including voter registration. January 15, 2015