On March 8, 2018, Tunisia, along with the rest of the world, celebrated International Women’s Day. This year’s celebration happened two months before the first municipal elections since the 2011 popular uprising that ousted President Zine El Abidine Ben Ali. On May 6, 2018, approximately 5.4 million voters, of which about 47 percent are women, will elect 7,176 municipal councilors in 350 municipalities. In past elections, the participation of women living in rural areas was reportedly low, even though they represent 35 percent of the total female population and play a fundamental economic role, especially in the agricultural sector.

According to the National Institute of Statistics, 65 percent of Tunisian women living in rural areas drop out of school at an early age, contributing to an illiteracy rate of over 30 percent within this population. This, along with other social and cultural barriers, leads to their low electoral participation and further marginalization. During an IFES training, a female participant from the impoverished north-west region of Jendouba said, “Men discourage women to vote; women stay in the villages, working at homes while men go to cities and participate [in] the political life by voting.” Based on consultations with 5,200 rural women in five governorates, the International Foundation for Electoral Systems’ (IFES) partner, the Tunisian Mediterranean Center (TU-MED), found that 83 percent of women said they did not vote during the 2014 national elections. As a result, IFES and TU-MED have launched several outreach campaigns targeting illiterate women living in rural areas to encourage them to register to vote and participate in the municipal elections. Registration is the first step of civic participation, as citizens cannot vote if they do not register. To convince women to register and vote, IFES and TU-MED have sought to illustrate the opportunity the municipal elections will create for the improvement of living conditions in these rural communities.

IFES initially prioritized six rural governorates in central and northwestern Tunisia based on their high levels of illiteracy. IFES later secured additional funding to extend the campaign to an additional six governorates in southern Tunisia. To reach out to the women living in these rural areas, IFES trained 286 women outreach ambassadors to engage in face-to-face dialogue regarding the electoral process and the importance of decentralization. The training sought to equip the outreach ambassadors with communication skills and a substantive understanding of civic and electoral issues, specifically regarding the municipal elections. At the end of a training, one participant from Siliana said, “I can now explain to a rural woman that her voice matters and that it is not only important to register but also to vote.” 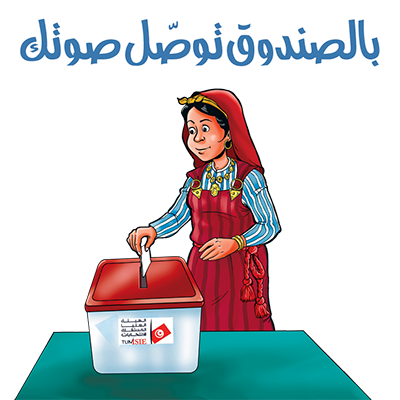 Beyond acquiring theoretical and practical knowledge, the outreach ambassadors also developed regional strategies adapted to their localities and devised educational tools tailored to best reach beneficiaries with low levels of literacy. An ambassador enthusiastically stated, “We are very excited to bring change to our region, this is where we grew up and I want to see our women empowered, they need to understand that their voice matter and that without them, we cannot change the current situation of our country.”

IFES and TU-MED devised a two-phase campaign: the first phase focused on voter registration procedures to encourage women to register; the second, which will be launched near the May 6 election date, will focus on mobilizing registered women to vote. During the first voter registration period in July 2017, IFES and TU-MED conducted several separate but simultaneous outreach campaigns in the six priority governorates. A total of 116 outreach ambassadors went door-to door, visiting farms, homes, markets, health centers, hairdressers, grocery stores and factories to meet and engage with rural women. The ambassadors traveled to 34 hard-to-access municipalities despite the difficult logistical and cultural challenges. The summer heat and road conditions, compounded with the resistance some women (and men) had toward the ambassadors, made their work even more challenging. Some ambassadors were unwelcome and subjected to verbal attacks in attempts to hinder their work. The deterioration of the economic and social situation, along with a lack of confidence in politics, made engaging in dialogue difficult at times. Convincing women that electoral participation was an important tool that could improve their future and that of their communities was an arduous effort, particularly since the government had not yet announced an election date. Some women also lacked identification cards, some of them had never applied for one and others had them confiscated by their husbands, making registration very difficult.

Despite these impediments, the outreach ambassadors succeeded in reaching 6,200 rural women, of which 4,216 (68%) registered to vote. To facilitate registration, the High Independent Authority for Elections (ISIE) sent registration agents to accompany the ambassadors, making it possible to register women on the spot. The IFES-TU-MED outreach campaigns had a significant impact on registration rates of rural women in the six governorates as the number of registered women peaked during the campaign period. Overall, the face-to-face campaign contributed to increasing the number of women on voters lists by 21 percent in the six priority regions.

Taking advantage of the municipal elections’ postponement until mid-2018, the ISIE decided to reopen voter registration in October 2017. Seizing this opportunity to register more rural women, IFES and TU-MED organized a second outreach campaign to encourage more women to register, and 110 ambassadors were re-mobilized to lead the new registration campaign. The ambassadors focused on highlighting the differences between the different types of elections, emphasizing that citizens can elect someone from their own region who is aware of local needs and problems and that citizens can follow up directly with the newly elected members of the municipal councils. Although the second campaign was shorter, ambassadors were able to reach an additional 3,100 rural women, out of whom 1,488 (48%) registered to vote.

The combined efforts of both outreach campaigns resulted in women ambassadors visiting over 40 municipalities, reaching 7,680 women (1,620 women were reached in both campaigns), and registering 5,704 (75%) of those women to vote. Cooperation and coordination between the ISIE’s regional electoral commissions and the ambassadors were one of the keys to the success of the campaigns. ISIE registration agents actively participated in the outreach campaigns, making it possible to register women immediately, greatly increasing the impact. Some of outreach campaign activities were covered by the media, including a report by the National Television.

With the municipal elections fast approaching, IFES and TU-MED are redoubling their efforts to reach out to rural women and encourage them to cast their ballot on May 6, the second phase of the campaign. Outreach ambassadors are preparing to deploy to 12 additional governorates, extending their coverage from the northern and central regions to six additional southern governorates. The new objective is to engage with 14,000 rural women before Election Day.

The voices of rural women matter and must be heard during the municipal elections. Their enfranchisement will help build a more inclusive democracy in Tunisia.

These activities are supported by the United States Agency for International Development and the Canadian Government.