The International Foundation for Electoral Systems (IFES) was honored to participate in an international visitors’ program on the occasion of Quebec’s 42nd general elections hosted by Elections Quebec, the Réseau des competences électorales francophones (Network of Francophone electoral bodies, RECEF) and the Francophonie (OIF) from September 28 to October 3, in Quebec City, Canada. Represented by Senior Gender Specialist Dr. Gabrielle Bardall, IFES engaged with the leaders of 15 election management bodies from the RECEF region as well as Canadian provincial and federal electoral chiefs and representatives of the OIF, the Quebec National Assembly and Elections Quebec.

For the members of the visitors’ group, this opportunity presented an exceptional occasion to witness many innovative and exemplary electoral management practices in action. The groups participated in two days of in-depth briefing and exchanges on the electoral system, followed by a jam-packed Election Day schedule including site visits to all the major spaces of electoral activity from before poll opening to the final announcement of results later that night, to a final debrief session. The event also provided an opportunity to reflect on the role of women in electoral administration. Worldwide, women represent less than a quarter of electoral management executives, including within the RECEF network, despite the demonstrated positive impact of women’s leadership on electoral processes and confidence in electoral democracy. During the visitors’ program in Quebec, Dr. Bardall, RECEF secretariat staff and the women executives from RECEF’s member states presented proposals for strengthening women’s leadership in electoral administration, including building networks of women electoral administrators.

The 2018 Quebec elections marked a historical shift in the Quebecois political landscape. Both of the historically dominant political parties were edged aside by centrist-conservative and progressive movements. Nearly 40 percent of women candidates competing in the elections won, catapulting the percent of women in the National Assembly from under 29 percent to the “parity zone” of 42 percent. The 2018 elections were the first to be held according to a fixed date calendar. 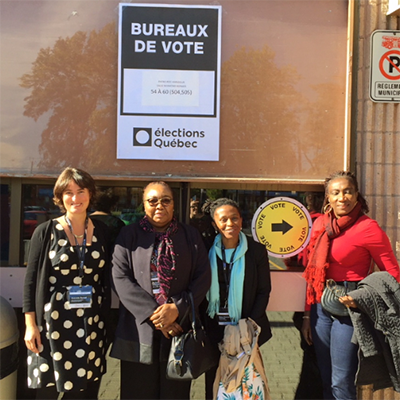 Outside a Quebec polling station

The elections were also remarkable for innovations in electoral management. Elections Quebec works actively to build a sense of civic responsibility and engagement across their activities. This year, nearly 180,000 children who came to the polling stations with their parents participated as “Electeurs en Herbe” (Voters in Training). Children were given a ballot with special questions designed just for them and used a specially designed ballot box and isolation booth to record their answers, helping explain the process and instill positive values around voting from an early age. Other Elections Québec outreach activities focused on targeted media campaigns on TV and online, supported by many local celebrities. Accessibility kits were provided at all polling stations to assist voters with a wide range of access issues and drew on focus group work conducted over the course of a year and material-sharing with Elections Canada. Quiz games and outreach educated Quebec voters about women’s political participation. Over 66 percent of voters turned out to vote on Election Day.

The Quebec electoral process is also remarkable for long-running management practices. Elections Quebec maintains a permanent voter registry, updated through automated sharing with multiple public records. As a result, Quebec citizens have extremely low rates of disenfranchisement. Election financing is based on a principle of offering a level and transparent playing field. Policies include strict caps on donations and spending and severe penalties for failures in campaign finance reporting. Looking forward, Elections Quebec anticipates studying options for enhancing protections on personal data contained in the register of voters, research on internet voting, and potentially adapting to electoral systems changes promised under the platform of the incoming government.