The International Foundation for Electoral Systems’ (IFES) youth programming taps into the vibrant social networks – both in-person and online – that exist on university campuses to support and nurture safe spaces for students to engage in civic education. To this end, IFES provided grants to youth-based organizations to foster more meaningful youth participation in Kenya’s electoral processes. The Universities and Colleges Students' Peace Association of Kenya (UCSPAK) was one of the awardees selected by IFES through a competitive process and given a grant to carry out civic education in universities to target first-time voters ahead of the 2017 general elections. The following is a reflection by Joel Mwita, secretary general of UCSPAK. 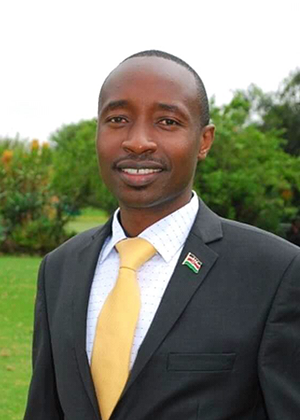 My name is Joel Mwita and I’m 25 years old. I’m the secretary general of University and Colleges Student Peace Association of Kenya (UCSPAK), a student body that has membership in 72 universities and colleges in Kenya. Whenever it comes to elections, there is always a lot of noise about voter apathy and the low interest among young people engaging in politics especially when it comes to voting. I hear things like “young people are so self-centered, so ignorant and not appreciative of the efforts our forefathers and mothers put in to accord us the freedom that we now enjoy.” One perennial accusation claims that, “youths of nowadays are so lazy and an embarrassment to the society, all they care about is social media and taking selfies.” These accusations never used to get to me even during election time because, personally, for a start, voting isn’t a really exciting activity. I can tell you of so many things I can do with that time rather than stand in long queues under the scorching sun to vote for leaders who care more about how the office will benefit them than how they’ll use their office to change people’s lives.

Whenever I hear the word politics, to me, it’s synonymous with corruption, land grabbing, money laundering, violence, etc., and the people who vote for leaders who propagate evil in society, all things I would never want to be associated with. When I think of political violence, I think of bloodshed, hurt, hatred and sadly the dead bodies, the majority of whom are young people who clashed with other young people to advance the interests of the older generation.

I was never interested in governance issues and electoral processes despite being a student representative in Maseno University and secretary general of USCPAK. Things shifted for me when a deadly terror attack in April 2015 claimed the lives of close to 150 students in Garissa University. It pained me to think of the young, educated people who committed this crime that claimed their peers’ lives. I stepped up and organized a memorial event for Garissa University in 2016 and 2017 and invited students from across the country to honor the departed souls. Among the invited guests were the majority leader for the Kenya National Assembly, permanent secretary for education, and director of the National Counterterrorism Center, all there to condemn the attack.

As I reflected on this sad event later, I thought of the suicide bombers under the age of 30 who committed the crime and the rate of radicalization along the Kenyan coast among young people, all due to lack of opportunities and how the political class had failed to meet youth’s aspirations. Kenya’s largest population was below 35 years, and employment should be at the top of the agenda of politicians so as to harness this demographic dividend. Yet I had never even voted or wanted to be participate in electoral processes, so who was I to complain? However, I had an opportunity to influence other young people to engage through the platforms I had together with my team through USCPAK. Later, the Independent Electoral and Boundaries Commission (IEBC) shared statistics of unregistered voters ahead of the 2017 election, the bulk of whom were under 25 years and totaled approximately 9 million. “9 million and I am in that bracket!” I thought to myself, “Those were enough to shift the political landscape in our country.” The statistics shocked me but served as a wake-up call that something needed to be done.

Luckily our organization, USCPAK, was selected by IFES through a competitive process and given a grant to carry out civic education in universities, targeting first-time voters. I took this role very seriously because it would also be my first time voting, and I was determined to share with my peers why I knew it was important to engage in electoral processes. IFES, in partnership with the IEBC, trained 300 of our campus representatives across the country, equipping them with the knowledge and skills they needed to mobilize other students to get out the vote on August 8, 2017. The campus representatives were excited to be engaged in this process for the first time to create awareness and motivate their peers to vote on Election Day. Through our activities, we were able to reach more than 300,000 students who pledged to vote on Election Day. There were those who, like me, initially would refuse, saying they didn’t anticipate change with the elected leaders. My response to them would be, “If you don’t vote in an election, you can’t complain about the individual or their opponent when one is elected because you did not use your right to vote, and thus, lost your right to complain.” Somehow the argument made sense and they too pledged to vote and even asked more questions about electoral processes.

Elections are over now, and I’m still creating awareness among my peers, encouraging them to understand government processes and the opportunities that exist for young people to participate. If we don’t act now, pay attention or become involved, nothing will change. I now believe the democratic process does not work if youth are not connected or engaged.