The Association of African Election Authorities (AAEA) and the International Foundation for Election Systems (IFES) undertook a joint mission to observe the December 5, 1998 local government elections in Nigeria. This mission was informed by an AAEAJIFES pre-election assessment mission conducted in November as well as by the presence of long-term IFES monitors who arrived in Nigeria earlier that month and who will remain in the country until the conclusion of the elections that are enabling Nigeria's transition to an elected, civilian government. The AAEAJIFES missions produced a Pre-Election Report (November 30, 1998) and a Post-Election Statement (December 8, 1998) which summarizing the mission's observations of the December 5 elections.

This final report on the December 5 elections, and of the monitoring of the immediate postelection period, presents the observations of the AAEAJIFES missions in the hope that our findings will contribute to the preparations for the upcoming Governorship and State House of Assembly elections scheduled for January 1999 and the parliamentary and presidential elections planned for February. We also hope that these observations may support the strengthening of Nigeria's electoral system, enabling the transition to a credibly elected civilian government by May 29, 1999.

Being composed of election officials, election experts and experienced election observers, the joint AAEAJIFES missions focused their assessment of the electoral process on the technical aspects of the administration of the vote. Areas of particular concern to the AAEAJIFES missions were:

•         the organizational capacity of the Independent National Electoral Commission (INEC); and

While this report suggests several means of promoting the credibility of the electoral process within each of these three areas, we hope that the !NEC will focus on two issues in the immediate short-term as it works to prepare for the conduct of the January and February votes: 1) additional clarification of election day procedures and 2) the use of indelible ink to further guard against multiple voting.

On December 5, election day, the AAEAJIFES observer mission noted the lack of a uniform application of election procedures from polling station to polling station, resulting from inadequate specificity concerning the procedures in the electoral guidelines, lack of thorough and timely training of poll officials and the lack of clear direction on the election day process in the Training Manual/or Poll Officials. We also noted the lack of uniform application of the electoral guidelines through the tabulation process. The INEC has now revised the poll official manual, and its distribution before the January 9 elections should contribute significantly to the poll officials' understanding of their responsibilities and of the process. However, we also urge the INEC to include in the electoral guidelines specific direction on such election day procedures as ensuring the secrecy of the ballot, the confinement of voters from the time of accreditation to voting and the use of indelible ink. We also recommend that the INEC address other aspects of the accreditation, voting, counting and tabulation processes that were not clear in previous guidelines. We recommend the re-training of election officials (including ad hoc/temporary staff as well as permanent staff of the INEC). The training should focus on the provisions of the electoral guidelines to prevent their uneven and often discriminatory application as well as enhance the professional nature of election administration.

Not unreasonable concern has been expressed by many election officials, leaders of political parties, Nigerian citizens and observers of the electoral process, including the AAEA/IFES mission, about the shortcomings of the voter registration process, including the reports of the disenfranchisement of eligible Nigerian citizens resulting from the shortages of voter's cards, reported multiple registration and the apparent lack of controls in the distribution of the cards. While the AAEA/IFES missions were unable to observe the registration process and comment fully on its effectiveness, we are encouraged that the INEC has placed an order to procure further supplies of indelible ink which will be used in the future to mark voters who have cast ballots. The use of indelible ink will help safeguard against multiple voting which might have been facilitated by the weaknesses in the voter registration process. We urge that the poll officials receive clear instructions on the correct application of the ink. We further urge that all polling stations be supplied with sufficient quantities of indelible ink for the January 9 elections. In the long-term, the AAEA/IFES mission urges the examination of all phases of the voter registration process, with efforts made to consider the computerization of the registration list to facilitate the enfranchisement of eligible voters, and the adoption of other measures to enhance the accuracy of the list.

The AAEA/IFES delegation recognizes the great challenge faced by Nigeria's Independent National Electoral Commission in administering the December 5 local government elections given the size of the country, the stated time frame for the transition process and the attendant logistical constraints. We note the tremendous desire of all Nigerians to make the transition to an elected, civilian leadership and to build a sustainable democratic system.

The local government elections of December 5,1998 demonstrated the commitment of the INEC, the political parties and the Nigerian people to the transition to democracy, as we witnessed people from all walks of life and all political persuasions cast their ballots for local government Councillors and council Chairmen. We are encouraged that this first vote passed with the support of most Nigerians, and we hope that the following months will be marked by a further commitment to a credible, transparent, and representative process on the part of all major stakeholders ·and the citizens of Nigeria. 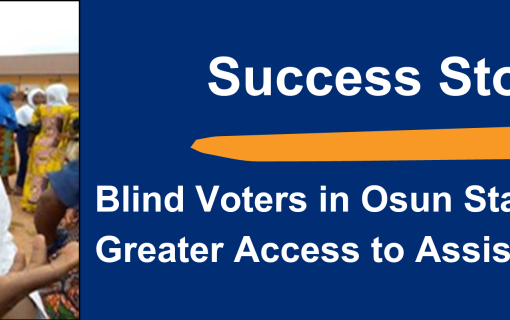 Democracy and the Crisis of Trust How to restore trust in democracy—before it's too late. Restoring Trust in Election Results September 29, 2022
Publication Report/Paper